Obama hikes taxes on the poor 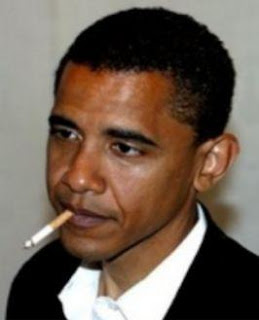 President Obama has hiked taxes. His first tax hike will hit the poor hardest. He signed a bill which expands the State Children's Health Insurance Program (SCHIP) by roughly $35 billion over the next five years. This expansion is funded by a 62 cent hike in the federal tax on cigarettes. Opponents of the program argued that, among other things, it will allow undocumented immigrants to illegally access taxpayer-financed health care, and is insufficiently funded. Now poor working class smokers will be paying for health care for illegal immigrants. This is a sad day in America. For smokers, this tax will reduce the already sad amount of $10 dollars per week in stimulus money the Obama Administration thinks will stimulate their economy. Who would have thought a fellow smoker would have betrayed his brethren in this way. Of course, Barack Obama is wealthy and living in the White House on the taxpayer's dime. He doesn't have to worry about the price of his smokes.
Posted by Bluegrass Pundit at 6:10:00 AM

Thanks for your valuable information.

It was really of use to me.

The No.1 Job and Career Search Portal

I don't smoke, so the tax doesn't affect me.

The problem is that overall a lot of our tax system is regressive: our poorest or least informed are forced to pay the burdens of it. Even with a progressive tax system, the wealthiest can avoid a lot of it that the middle and lower classes can't even qualify for. Ever see the Tax Code, and the manuals that are used by corporations and accountants to figure out the loopholes? They can take up a whole row of shelves at your library, could dwarf that library's entire fiction collection. All it takes is an accountant earning $80k a year to find a $8 million loophole for a corporation and the rest of us are screwed because of it.

Wow! I'm impressed that you are concerned about poor smokers getting a good deal IR. Most of the conservatives I debate with complain that the poor don't pay taxes and the rich have all the burden.
Truthfully, I don't have a problem with the cigarette tax. Especially if it's a poor person. If a poor person can afford $10 a day for smokes then he can have a portion of that go to pay the medicaid bill if he gets a disease caused by his smoking. Or if his kids get sick from his second hand smoke.
Even us Libs demand responsibility IR.

Let's face it. Smoking is expensive and at the same time it causes a lot of health problems. There's parents out there who smoke while their children are around! Don't they know it can jeopardize their children's health? So I think it's fine to get funding of the SCHIP program from the hiked cigarette taxes.

This is a tax that affects the poor. Obama said he would not raise taxes on people making less the 250k per year. He has not kept that promise. What is next? A liquor tax? A fat food tax? A couch potato tax? A promiscuous sex tax? We can find lots of people doing lots of things that adversely affect their health. Smoking seems to be the one they want to pick on. This is because 80% of the population does not smoke. It is easy to criticize a smoker, but hypocritical if you are more than 20 pounds over weight.

Rich people and middle class people have been known to use tobacco IR. If this gets a few poor people to quit or cut down and save some medicaid dollars it's a good thing. Just cause I'm a Lib doesn't mean I'm against responsible behavior.

Truth 101 is a little dense. Not only is Obama already raising taxes on the poor ( the majority of whom make up that class of reviled smokers), but that wont be enough to pay for the program in the future, which will require more taxes , probably by the middle class.

Oh, and we know you libs love taxes. But your guy ran on a platform saying he would not raise taxes on the bottom 95 % . So he lied.