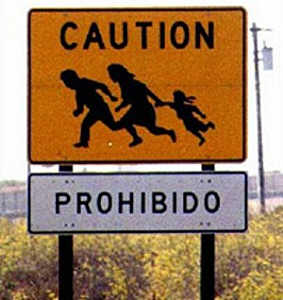 According to the CBO, the stimulus bill will actually hurt the economy in the long run. However, there is the possibility it will stimulate illegal immigration. In addition to providing up to 300 thousand construction jobs for illegal aliens, the bill will bail out irresponsible states like California. This will allow them to avoid dealing with one of the primary reasons they have a budget deficit. That reason is the extensive and expensive social net they have extended to illegal immigrants. When you couple this stimulus bill with the collapsing state of the Mexican economy and government, we could see a tidal wave of new migrants heading across the border by the end of this year.

American Patrol Report Commentary
It is now becoming perfectly clear that the leftist Obama administration will succeed in stimulating something, namely illegal immigration
. According to World Net Daily, the bill would supply 300,000 construction jobs to illegal aliens.

Moreover, it would keep the hot button issue of illegal immigration off the stove by bailing out states like California. They do it through a number of devices, including the so-called education-related fiscal stabilization provision that some say will provide more than $20 billion to California alone.(excerpted) read more at rightsidenews.com