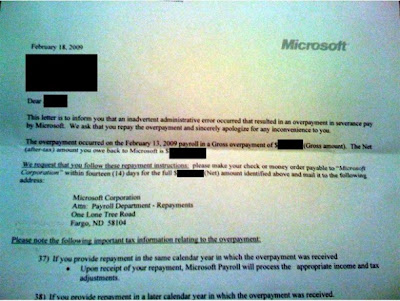 Microsoft wants laid off employees to return part of their severance pay. I guess over $50 billion is not enough money for Bill Gates. Microsoft recently laid off 1400 workers ,mostly in the US. They have now decided their severance package was too big. They have sent the a letter (see picture) to them asking for the money back. Perhaps some of those mosquitoes Bill Gates recently released at a tech conference have infected him with an insanity virus.

Microsoft wants refund from some laid off workers
by Steven Musil

Microsoft says it made an accounting error when it laid off some employees last month and now feels the best way to correct the error is with what will likely add up to a public relations blunder.

The software giant, which recently laid off 1,400 employees, sent letters (see image below) this week to some of those former workers letting them know that their severance payouts were a bit too "generous" and respectfully requested that the former employees pay back that money, according to a report Saturday on TechCrunch.


"An inadvertent administrative error occurred that resulted in an overpayment in severance pay by Microsoft," the letter states. "We ask that you repay the overpayment and sincerely apologize for any inconvenience to you."

A Microsoft spokesperson confirmed that the authenticity of a letter posted on TechCrunch, but declined further comment, saying it was "a private matter between the company and the affected people.(excerpt) read more at news.cnet.com

Glad to see you're on the side of oppressed workers IR. I knew my visits would have a positive effect on you Brother. Solidarity!

"Glad to see you're on the side of oppressed workers IR. I knew my visits would have a positive effect on you Brother. Solidarity!"