The stimulus bill will force the military to buy electric vehicles 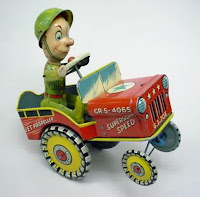 According to U.S. Sen. Jim DeMint, the stimulus bill will force the military to buy electric vehicles. You have to wonder if the democrat's cheese has completely slipped off their cracker. Are electric tanks and helicopters next? The military can not depend on electric vehicles in a time of war or emergency. That is highlighted now in the State of Kentucky where Governor Beshear has deployed the entire KY National Guard to help out in an ice storm. There is now no power in the areas they are being deployed. Electric vehicles would be useless. In an emergency, you want all your vehicles to function. I guess the Democrats have never head of an EMP pulse. If we ever had that occur, all the electric vehicles would be fried.

The Democrat bill takes money, actually it borrows money, and decides where it should go. It does virtually nothing to stimulate the economy while it wastes billions of taxpayer dollars. It's a hodge-podge of long-supported pet projects that the normal budget process would have thrown out. Using the troubled economy as their motive, Democrats have opened the floodgates for all sorts of outrageous wasteful spending. Here are just a few examples from the Senate's bill, which we will debate next week:

The electric car episode has negatives and positives. For most Air Force organizations...they actually could be "forced" onto units and serve as simple vehicles on any base. The counter-arguement is that they will have to build electrical recharging stations around every base...so toss in a $150k for each base there.

The batteries? There again, the life for these are around three years, so figure around $4k for replacing the batteries and then disposing of the older batteries.

Money-wise, I doubt seriously anything is saved, but maybe pollution is cut slightly (but disposing of batteries constantly will become an issue).