Pakistan caves in to Taliban and implements sharia 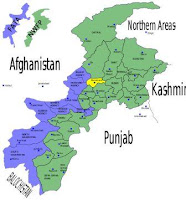 The leaders of Pakistan don't have one quintillionth of judgment if they think making a deal with the Taliban for sharia is a good idea. They have agreed to end hostilities and implement sharia in the Malakand area of North Central Pakistan(yellow on map.) Don't they remember sports stadiums being used to stone women to death for minor transgressions? Don't they remember the al Qaeda training camps? The Taliban are religious fanatics and can not be expected to behave in a reasonable fashion. This is a move backwards in the war on terror.

Pakistan to end military operation and implement sharia in Malakand Division
By Bill RoggioFebruary 15, 2009 11:22 AM

The Pakistani government has negotiated an agreement with the Taliban in the war-torn district of Swat to end the fighting in exchange for the implementation of sharia, or Islamic law in a large region of the Northwest Frontier Province.

Negotiations on the five-point agreement have been conducted between the government of the insurgency-infested Northwest Frontier Province and Sufi Mohammed, the spiritual leader of the Movement for the Implementation of Mohammad's Sharia Law, and Mullah Fazlullah, the leader of the Swat Taliban and Sufi's son-in-law. (excerpted) read more at longwarjournal.org

The Taliban are animals.

This is bad news for Pakistan, US, India, Russia, China, sh%t. The whole damn world.
I'll argue day and night that Iraq was a mistake. Pakistan is a real nightmare unfolding.

It's not incredibly surprising. Since Musharraf stepped down, Pakistan has been teetering on a civil war that may well put Islamists in charge of a country with nuclear weapons.

Another reason it might be happening is because Pakistan is probably trying to turn away from the U.S. It's possible they are reacting to the killing of Pakistani civilians by U.S. airstrikes along their northwest border with Afghanistan. In their minds, they might see the Taliban as the lesser evil. If the U.S. wants a Pakistani ally, we have to prove on the ground that we are a better alternative than Islamists. If an Islamist regime does take over, don't be surprised if they are uncooperative when it comes to Obama's actions along the Afghanistan border. That's when it will get REAL interesting.

Killing civilians, even if it's unintentional, will not endear the people to our country's mission. It's as simple as that.