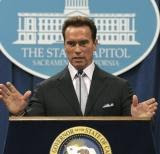 RINO Arnold Schwarzenegger want us to join the Obama team. He is frothing at the mouth for Obama because Nancy Pelosi , Barbara Boxer and Dianne Feinstein packed lots of goodies in the "Spendulas" bill for cash starved California. Instead of cutting waste from California's budget, Arnold is focusing on smooching Obama's butt for cash. This should just about "terminate" what little relationship he has left with the GOP.

Schwarzenegger says he feels strongly that Obama needs team players right now. He says governors, Congress, the White House—everyone has to play together during these tough times, rather than playing politics and making attacks. (excerpt)read more at Breitbart.com

I think at this point he is just desperate. His plan to flex his muscles and scare the pencil neck politicians into fiscal responsibility hit a snag somewhere around week one when they just ignored him. He can either leave behind a legacy about as desirable as that of Bush, or he can start (to put it in your terms) eating the Kool-Aid straight from the packet. Oh yeah!

I misunderestimated the Governator. He's actaully a man of keen insight and pragmatism. The Republicans would do well to follow his lead and embrace the policies of Presdient Obama.


"inhalen"? No IR. I'm not "inhalen" anything. I just speak the truth and right wingers deluded themselves into believing I'm "inhalen" something.