If you are expecting a big stimulus rebate, how does $10 a week sound? 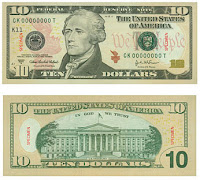 Many people remember the $600 or $1200 stimulus rebate they got from President Bush. They were expecting more from Barack Obama. They were wrong. The Democratic stimulus bill before the Senate only gives individuals a maximum of $10 a week more in take home pay. Joint filers can get a maximum of $20. That is $500 per individual and $1000 per family spread over one year. Some low end and high end wage earners won't even get that much. If the stimulus passes, it will be later this year before you see any of the money. How can this stimulate the economy? This will not cause anyone to buy a new car, place a down payment on a house or take a vacation. If you stop by McDonald's twice a week for breakfast, you will blow your whole stimulus rebate. No wonder public support has dropped to 42% according to rasmussenreports.com.
Posted by Bluegrass Pundit at 9:10:00 PM

The stimulus bill isn't through the senate yet. Who knows what goodies will be in this version. The difference between us is I admit I like the goodies. I also admit I want them paid for in cash rather than credit. A far as I'm concerned, the feds can keep their bullcrap stimulus checks. If I have to pay a few more bucks a week in taxes I'm more than happy to if that means goodies and a national debt on the decline.

They should keep the lousy $10-20. That won't stimulate shit.

Clarification: We get to keep an extra $10 a week of our own money. At the same time they are taking $10 a week from us and giving to someone else who doesn't even pay taxes, even if they aren't in this country legally.

We are getting screwed.