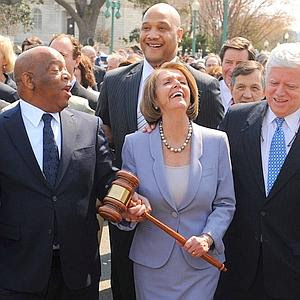 This is how you drain the swamp into your stock account.


Former Speaker of the House — and current Minority Leader — Nancy Pelosi apparently bought $1 million to $5 million of Visa stock in one of the most sought-after and profitable initial public offerings (IPO) in American history, thwarted serious credit card reform for two years, and then watched her investment skyrocket 203%.

In early 2008, Nancy Pelosi and her real estate developer husband, Paul, were given an opportunity to buy into a Visa IPO. It was a nearly impossible feat–one that average citizens almost certainly could never achieve. The vast majority of purchase opportunities went to institutional investors, large mutual funds, or pension funds.

Despite Pelosi’s consistent railing against credit card companies, on March 18, 2008, the Pelosis bought between $1 million and $5 million (politicians do not have to report the exact amounts, only ranges) worth of Visa stock at the IPO price of $44 per share. Two days later, the stock price rocketed to $65 per share, yielding a 50% profit. The Pelosis then bought Visa twice more. By their third purchase on June 4, 2008, Visa was worth $85 per share.