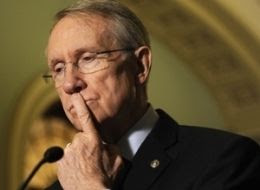 Some Republicans are supporting modifying the 14th Amendment to prevent illegal immigrant anchor babies. The 14th Amendment was passed in the aftermath of the Civil War. In order to prevent states from denying citizenship to newly freed slaves, the Amendment made anyone born on American soil an American citizen. Now, 1 in 12 babies born in the U.S. are children if illegal immigrants. These anchor babies are U.S. citizens and put their parents on a path to citizenship. Democrats have severely criticized Republicans for suggesting this change. Republicans have been accused of everything from racism to being anti-baby. Here is what Senate Majority Leader Harry Reid said about Republicans proposing a change to the 14th Amendment:

"They've either taken leave of their senses or their principles."

Now we learn, Harry Reid introduced a short lived bill in 1993 to accomplish the same goal.

Mr. Reid introduced a bill to the Senate Judiciary Committee as the Immigration Stabilization Act of 1993.

The smell of hypocrisy is in the air.
Posted by Bluegrass Pundit at 5:38:00 AM