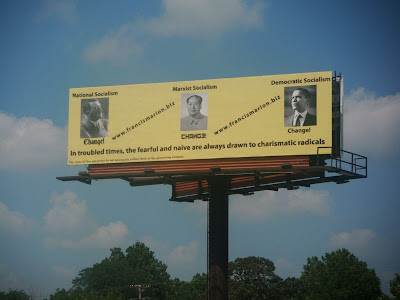 The anti-Obama billboard is on Highway 71, heading to Kansas City, in Missouri. It has captioned pictures of Hitler, Mao and Obama. The billboard captions Obama as a "Democratic Socialist" and says:

"In troubled times, the fearful and naive are always drawn to charismatic radicals"

The billboard was put up by a group called Francis Marion Nation LLC. Their business statement says:

"We can honestly say that, we (the 'Angry Americans') are tired of the socialist abuse of our kindness. Hence, it is our mission to identify those socialist leaders, allow them to face the scrutiny and humility of America and educate our citizenship on their destructive (sic) purpose and goals."

The group also has an anti-VAT tax billboard in Kansas with "You Liar" and a picture of Obama. You can see that billboard here.
Posted by Bluegrass Pundit at 3:41:00 PM

Personally, I believe Obama has very strong Socialist tendencies and roots, but I can't endorse comparing anyone to Hitler.

Obama is certainly a "charismatic radical," but Hitler was more than that. He murdered millions.