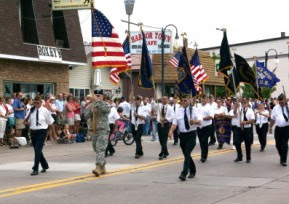 The Marathon County Labor Council was going to be forced to pay the insurance and police costs for their Labor Day parade if Republicans were excluded. They caved. It's always about the money with unions.


WAUSAU, Wis. (WLS) - The Marathon County Labor Council has reversed a decision that excluded Republican politicians from participating in the Labor Day parade in Wausau.

Labor Council President Randy Radtke earlier said Republican elected officials were not invited because they supported changes to collective bargaining for public employee unions. Wausau Mayor Jim Tipple responded by threatening to withhold financial support for the parade unless everyone was allowed to participate.

WSAW-TV says Radtke released a statement Wednesday which said the Labor Council didn't want community groups and school bands affected, so Republicans will be allowed in the parade.

Tipple told WLS Radio's Bruce Wolf and Dan Proft show Tuesday that the city provides an insurance premium, a stage setup and police traffic control for the parade. Tipple said the city would have required the Labor Council to reimburse the city for those expenses if it didn't reverse its decision. Keep on reading...