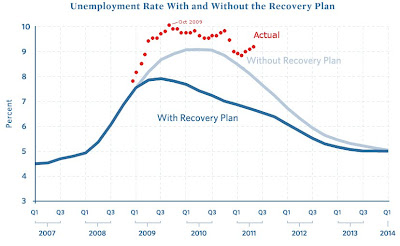 President Obama's mistakes have been numerous, but I will focus on what I believe to be the three biggest in this post.


1. The Stimulus has mostly been a failure. President Obama and Democrats passed a bill that was mainly aimed at rewarding unions, environmentalists and other Democratic constituencies. It was poorly aimed a real long-term job creation. The cost of each Stimulus job, by a basic calculation method, was over $200k per job. Supporters counter that we purchased a lot of badly needed infrastructure, but infrastructure is not jobs. Many of the Stimulus jobs, such as construction and research projects, were temporary jobs. They ended when the projects were completed or the money ran out. The Stimulus was passed with almost no Republican votes. Failing to work with Republicans on a spending bill of this size turned a heated political rivalry into a bitter feud.

2. The poorly named Affordable Care Act (Obamacare) was passed without any Republican support. Passing a gargantuan spending bill that re-aligned a significant portion of the U.S. economy and impacted virtually every American on a purely partisan basis was a huge mistake. This turned an already bitter rivalry into an all-out blood feud. Not only did President Obama alienate and anger the opposition party, he also used up his political capitol with moderate Democrats.  In order to do a 'real' jobs bill or serious reform of entitlement spending and tax structure, President Obama and Democrats need Republican and moderate Democrat support. As you can see from the recent debt ceiling debacle, that isn't likely to happen anytime in the near future.

3. President Obama has created an anti-business climate perfect storm. President Obama has vilified business and practically called some of them evil. His administration and a democratically controlled Congress have piled on new regulations, mandates and rules. These include, but are not limited to, Dodd-Frank bill for financial regulation, Obamacare for health insurance, new oil drilling restrictions and EPA regulation of CO2 emissions. Additionally, President Obama has stacked the labor Board with virulent anti-business unionists. To top this off, President Obama has many times declared his desire to increase taxes on business and small business owners. What businessman in his right mind would take any serious risk of capital to expand and create jobs in this kind of environment? The only expansion taking place now is where it is a slam-dunk financially.


I Could mention President Obama's escalation of the deficit by over $4 trillion and his promise to dramatically raise energy costs (which seems to be in progress), but that would be superfluous at this point.

Because he is apparently NOT interested in creating jobs in the USA, judging by his job-killing policy and tactics by his administration--