Nancy Pelosi Reported Net Up 50% in One Year 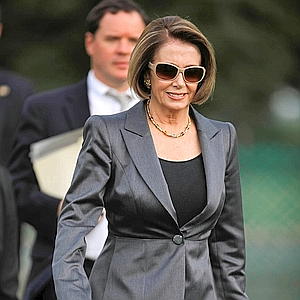 It's nice to know someone is prospering during the 'Obama years'. The rest of us are watching our home values and retirement investments plummet.

Minority Leader Nancy Pelosi (D-Calif.) reported a minimum net worth for 2010 that was more than 50 percent higher than the prior year, according to personal financial disclosure forms made public by the Clerk of the House on Wednesday.

Speaker John Boehner (R-Ohio) also saw a healthy growth in his minimum net worth, but the total change in his case is in the hundreds of thousands of dollars, while Pelosi’s is in the millions.

Pelosi, who ranks among the 50 richest Members of Congress, reported $43.45 million in minimum assets, according to financial disclosure reports released Wednesday. That marks an increase of more than $13 million in assets from 2009.

Correction: Corrected title. Thanks to "anonymous."
Posted by Bluegrass Pundit at 1:10:00 PM

Pelosi must have invested wisely. Plus her fees for selling out the country couldn't hurt. No conflict of interest here.

You might want to re-read the bold quote. You will notice it says that she had an increase in assets 'of' 13 million, not 'from' 13 million.

But haven't you all made millions in personal wealth in the last two years ?

Pelosi musta got some of them there "cattle futures" like hillary did about 20 years ago!!