Democratic strategist about Obama's re-election chances: "“If the election were next Tuesday he’d lose. " 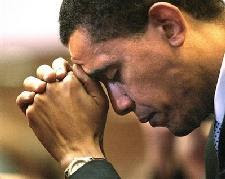 President Obama will be judged mainly on economic performance. There is little chance of any significant improvement in the employment numbers or housing market in the next year. Obama will need an economic miracle to survive.


(The Hill) — President Obama arrived back in Washington after his August vacation to deal with a hurricane, but Irene was only the first of many tests awaiting the embattled commander-in-chief.

With his approval ratings at the lowest point in his presidency, Obama returns to face a restless Congress, a hurricane that tore up the East Coast, continued unrest and uncertainty in the Middle East and an ailing economy that is not expected to improve much before the 2012 elections.

“If the election were next Tuesday he’d lose. That’s how bad it is,” says a Democratic strategist.

To bad the election isn't tomorrow, but I doubt things will change much before Nov 2012, if fact, they may very well get worse if that is possible.