Russian Prime Minister Vladimir Putin: the U.S. is a “parasite” 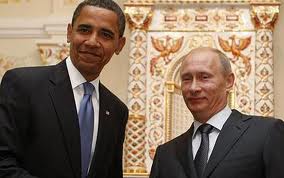 Our naive President gave away the European missile shield to appease the Russians. He no doubt thought it would improve U.S. Russian relations. That hasn't happened. Whan dealing with the Russians, you are only as good in their mind as the next thing they want you to give them.


(Bloomberg) — For Russian Prime Minister Vladimir Putin, the U.S. is a “parasite” because its rising debt weighs on the global economy. For his government, the same debt is the safest possible investment.

Russia, the world’s largest energy producer, has boosted its holdings of U.S. debt by more than 1,600 percent since September 2006, according to U.S. Treasury Department data. Russia used surging commodity prices to build the world’s third-largest reserves pile, boosted in part by return on Treasuries.