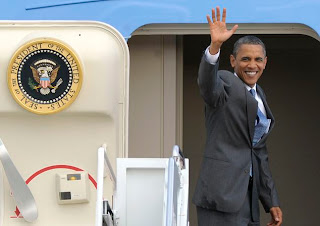 President Obama and Michelle took separate jets on Martha's Vineyard vacation. After getting there, they are staying it the $50,000 a week Blue Heron Farm. President Obama sings the 'green' song and takes bus tours to get in touch with ordinary Americans, but at the end, he is nothing but a hypocritical elitist.

President Barack Obama ditched the Beltway grind yesterday to seek the pleasures of summer on the beaches of Martha's Vineyard - by way of two helicopter flights and a trip aboard Air Force One.

And a further government jet was used by Michelle Obama as she arrived separately to her husband, with daughters Sasha and Malia, just a few hours before he landed.

The President left the White House aboard Marine One on his way to Andrews Air Force base to hitch a lift aboard Air Force One.