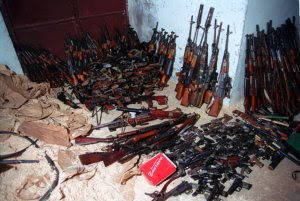 Is this gross bureaucratic incompetence or a pay-off for silence?


The ATF has promoted three key supervisors of a controversial sting operation that allowed firearms to be illegally trafficked across the U.S. border into Mexico.

All three have been heavily criticized for pushing the program forward even as it became apparent that it was out of control. At least 2,000 guns were lost and many turned up at crime scenes in Mexico and two at the killing of a U.S. Border Patrol agent in Arizona.

The three supervisors have been given new management positions at the agency's headquarters in Washington. They are William G. McMahon, who was the ATF's deputy director of operations in the West, where the illegal trafficking program was focused, and William D. Newell and David Voth, both field supervisors who oversaw the program out of the agency's Phoenix office.

McMahon and Newell have acknowledged making serious mistakes in the program, which was dubbed Operation Fast and Furious.

"I share responsibility for mistakes that were made," McMahon testified to a House committee three weeks ago. "The advantage of hindsight, the benefit of a thorough review of the case, clearly points me to things that I would have done differently."

Three Bureau of Alcohol, Tobacco, Firearms and Explosives spokesmen did not return phone calls Monday asking about the promotions. But several agents said they found the timing of the promotions surprising, given the turmoil at the agency over the failed program.

'Fast and Furious' is tied to a border agents death.
Posted by Bluegrass Pundit at 12:14:00 PM

Email ThisBlogThis!Share to TwitterShare to FacebookShare to Pinterest
Labels: Fast and Furious