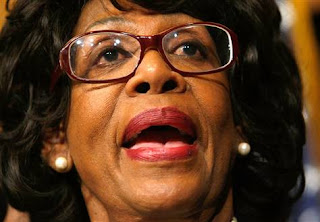 This is part of the 'reduction of vitriol plan' President Obama is now ignoring.


(LA Times)- Rep. Maxine Waters (D-Los Angeles) came out swinging against Republicans in Congress on Saturday as she addressed the unemployed during a forum in Inglewood.

The event occurred a day after new statistics were released showing that California's jobless rate last month went up to 12%, from 11.8%. California now has the second-highest rate of unemployment in the nation, trailing only Nevada at 12.9%, and its jobless rate is well above the U.S. average of 9.1%.

Waters vowed to push Congress to focus on creating more jobs. "I'm not afraid of anybody," said Waters. "This is a tough game. You can't be intimidated. You can't be frightened. And as far as I'm concerned, the 'tea party' can go straight to hell."

More than 1,000 people attended "Kitchen Table Summit," which was designed to give the jobless an opportunity to vent to elected officials and share their struggles about finding a job.

From the Tea Party to Maxine: the same applies to you.