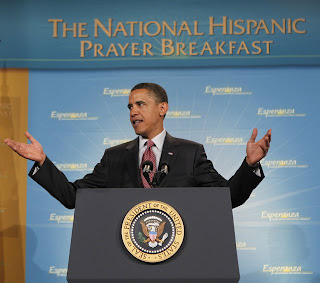 Perhaps President Obama should try to shore up his Hispanic support with a backdoor amnesty program or something. Oh, he has already thought of that.


(CNS)- Only 49 percent of Hispanic Americans said last week they approve of the job Barack Obama is doing as president, according to the Gallup poll. That is down 36 points from the high of 85 percent that Obama’s approval hit among Hispanics in the Gallup poll in the spring of 2009, his first year as president.

Obama’s approval among Hispanics hit an all-time low of 45 percent in the last week of July, according to Gallup. It has rebounded modestly since then.