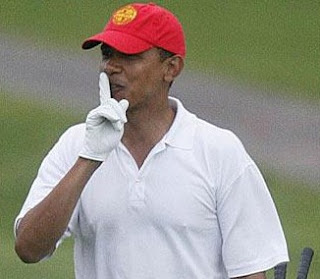 Most Americans are suffering and can not afford an expensive vacation. Unemployment remains stubbornly high and the stock market melted-down during the last couple of weeks. President Obama has embarked on a long vacation at a ritzy Martha's Vineyard estate that rents for $50,000 a week. He doesn't want his golf game advertised.


(Boston Globe) — If his comings and goings yesterday are any indication, President Obama will be keeping a very low profile during his Martha’s Vineyard vacation.

On Day 1 of the first family’s nine-day stay on the island, Obama remained mostly out of sight, not emerging from Blue Heron Farm until 12:15 p.m., when his motorcade headed into Vineyard Haven and a visit to Bunch of Grapes Bookstore. (Daughters Sasha and Malia walked out with a bag containing, among other books, David Gessner’s “My Green Manifesto: Down the Charles River in Pursuit of a New Environmentalism,’’ which we recommended Obama read in our column this week.)

But it was later, at the Vineyard Golf Course in Edgartown, where the president’s recalcitrance was most evident. Approaching the eighth tee in a golf cart with friend and frequent golfing buddy Eric Whitaker, the president noticed three TV cameras and a Globe photographer across the street. Rather than stop and be photographed teeing off, the president skipped the hole.