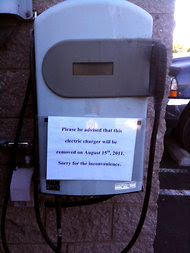 The note reads: “Please be advised that this electric charger will be removed on August 15th, 2011. Sorry for the inconvenience,”

Nobody was using the electric vehicle chargers in Costco's parking lots. They have decided to remove them.


Costco, the membership warehouse-club chain, was an early leader in offering electric-vehicle charging to its customers, setting an example followed by other retailers, including Best Buy and Walgreen. By 2006, Costco had installed 90 chargers at 64 stores, mostly in California but also some in Arizona, New York and Georgia. Even after General Motors crushed its EV1 battery cars, the Costco chargers stayed in place.

Yet just as plug-in cars like the Nissan Leaf and Chevrolet Volt enter the market, Costco is reversing course and pulling its chargers out of the ground, explaining that customers do not use them.

“We were early supporters of electric cars, going back as far as 15 years. But nobody ever uses them,” said Dennis Hoover, the general manager for Costco in northern California, in a telephone interview. “At our Folsom store, the manager said he hadn’t seen anybody using the E.V. charging in a full year. At our store in Vacaville, where we had six chargers, one person plugged in once a week.”