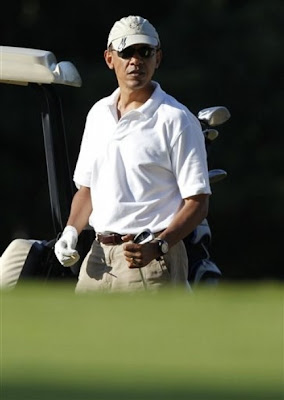 Stimulating the economy at clubhouses across America...


VINEYARD HAVEN, Mass. (AP) — President Barack Obama has once again hit the golf trifecta as he vacations on Martha’s Vineyard.

He spent more than two hours at Mink Meadows Golf Club on Tuesday, a semi-private, nine-hole club on the island’s north shore. It was Obama’s fourth outing since he arrived last week for a 10-day vacation. His golf partners included his friend Eric Whitaker and White House chef Sam Kass.

Obama has now played all three island courses — just as he did during family vacations in his first two years as president.