Pants On Fire Award: Obama accuses Boehner from walking away for deficit deal 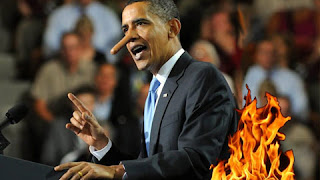 President Obama moved the goal posts on Boehner several times during the debt ceiling negotiations. Once, obama got angry and pushed away form the table and stormed out. Now that some time has passed, President Obama is attempting to rewrite history and accuse John Boehner of walking away from the deal.


(CNSNews.com) — President Barack Obama told an audience on the first stop of his bus tour that his original deficit reduction plan could have solved the nation’s debt problem “tomorrow” but House Speaker John Boehner walked away from the deal.

“The fact of the matter is that solving our debt and deficit problems simply requires all of us to share in a little bit of sacrifice, all of us to be willing to do a little bit more to get this country back on track and that’s not too much to ask,” Obama told a crowd in Cannon Falls, Minnesota on Monday.

“Basically what we need to do is we need to cut about 4 trillion dollars over the next 10 years. Now that sounds like a big number, it is a big number but you know, if we were able to, as I proposed, cut about 2 trillion dollars in spending — if folks who could best afford it, millionaires and billionaires, were willing to eliminate some of the loopholes that they take advantage of in the tax code and do a little bit more and if we were willing to take on some of the long term costs that we have on health care — if we do those things, we could solve this problem tomorrow.”

Obama continued, “I put a deal before the Speaker of the House John Boehner that would have solved this problem and he walked away because his belief was we can’t ask anything of millionaires and billionaires and big corporations in order to close our deficit.”