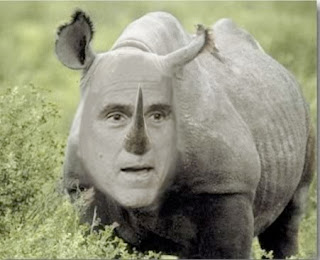 The problem is nobody is going to believe him. This shift in position is likely due to Texas Gov. Rick perry entering the GOP 2012 race. Perry has come down very clearly in the AGW skeptic camp.


(Politico) — Hours after being called “mushy on environmental issues” by a Republican senator, Mitt Romney has tweaked his position on global warming.

Asked Wednesday at a Lebanon, N.H., town hall meeting whether he believed in global warming and if humans contribute to rising temperatures, Romney said he doesn’t know.

“Do I think the world’s getting hotter? Yeah, I don’t know that but I think that it is,” Romney said, as reported by Reuters. “I don’t know if it’s mostly caused by humans.”

“What I’m not willing to do is spend trillions of dollars on something I don’t know the answer to,” he added.
Just two and a half months ago in New Hampshire, Romney expressed concern about climate change and greenhouse gas emissions.

Romney NEVER met a tax he didn't like, his ENTIRE life-- he learned that at the knee of his big-government Nixonian RINO GOP dad, Governor (MI) and US Senator George Romney. The apple has and will always NEVER fall far from the tree. The son, Mitt Romney, now finds himself at odds with the party his dad was so enamored by, because it ain't the same party anymore-- We Are TEA (Taxed Enough Already)!