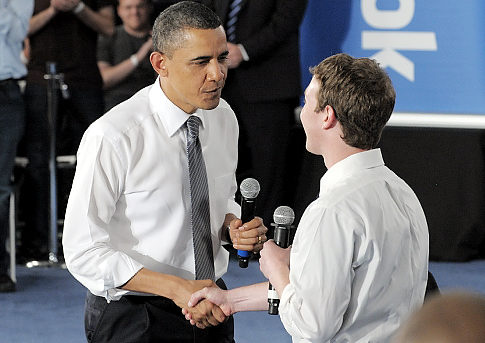 Facebook claimed it was an error after they were publicly busted. That claim is ridiculous. Everyone knows who Arizona Gov. Jan Brewer is. Facebook CEO Mark Zuckerberg is an Obama friend and supporter.

(550KFYI)- The Republican governor had said in a post Friday that Facebook censored the item she posted Thursday because it apparently violated Facebook's community standards.

Brewer didn't elaborate in her post, but she said Friday in an interview that an email she received from Facebook said the post was removed because of an included illustration.

The email, which she read aloud, didn't specify how the illustration violated standards.

"I'd like to know why it happens,'' she said of the removal.

Facebook spokesman Andrew Noyes responded to a query by The Associated Press by saying in a brief email that Brewer's post was removed in error and that Facebook was sorry.

Noyes did not provide further details, including whether the removal of the post on Thursday resulted from complaints received from other Facebook users.

Brewer reposted the item Friday, saying the original post was ``censored'' by Facebook. Both versions included a statement in which she criticized the Obama policy decision and the illustration, a color drawing of Brewer in a Rosie the Riveter pose.

That only leaves millions and millions of other Facebook posts that are critical of Obama....but of course Facebook doesn't want them seen on relatively high-profile or heavily trafficed Facebook pages suh as Brewer's-- remember, Obama's #2 guy, Effing Big Deal Joe said that government leaders who oppose Obama are TERRORISTS.