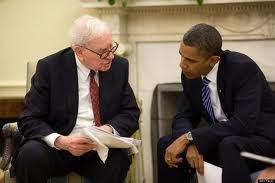 Billionaire investor Warren Buffett recently claimed he wanted his taxes increased. Hopefully, President Obama gave him the address to mail his check too.


(The Hill) — President Obama on Monday reached out to billionaire investor Warren Buffett and Ford CEO Alan Mulally for advice as he crafts a major jobs plan to be released after Labor Day.
Berkshire Hathaway head Buffett, who has become an Obama confidant, made waves earlier this month when he called on wealthy Americans to pay more in taxes in order to reduce the deficit.
Obama has been calling for higher taxes on the wealthy as part of a “balanced approach” to the debt.

“The President and Mr. Buffett discussed the overall outlook on the economy and the reaction to the headwinds we’ve experienced over the last couple of months,” White House spokesman Josh Earnest said. “They talked a little bit about some possible measures that would spur investment and increase economic growth. And they also talked about some measures that could address the long-term fiscal situation in this country.”