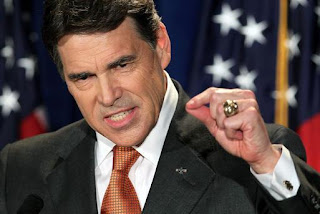 
CEDAR RAPIDS, Iowa (ABC News) — Just hours after presidential candidate Rick Perry said that he would be the kind of president who would be “passionate” about America, the Texas governor suggested that President Obama may not share the sentiment.

“I think you want a president who is passionate about America — that’s in love with America,” Perry said during a visit to the Iowa State Fair on Monday.

At a Republican Party event Monday night, a reporter asked Perry whether he was suggesting that President Obama does not love America.

“You need to ask him,” Perry responded. “I’m saying, you’re a good reporter, go ask him”
Perry’s remarks at a Linn Country Republican Party meet-and-greet in Eastern Iowa included a sharp critique of President Obama’s jobs record on a night when the president held a town hall meeting in Decorah, Iowa, about 100 miles north of here.

“He’s gonna talk about jobs,” Perry said. “But I think the only job he cares about is the one he’s got.”
“I think it’s fair for Iowans to ask the president tomorrow, where are the jobs that you promised, Mr. President?” Perry said. “That’s a fair question to ask this man.”

He called Obama the “greatest threat to our country” and touted his own record of job creation in his state, declaring that Texas has “the strongest economy in the nation.”