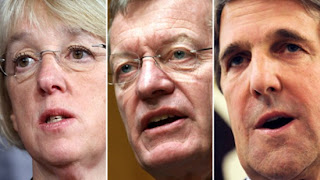 What? They want to twist the debt reduction super committee into a venue to increase spending. This shouldn't be shocking. Back in 2009, VP Joe Biden wanted us to spend our way out of bankruptcy. Democrats think spending is the solution to all problems.

(The Hill) — Senate Democrats on the super committee say the group needs to include stimulus for the economy in the deficit-reduction plan it has been tasked with producing by Thanksgiving.

The three Senate Democrats serving on the 12-member deficit supercommittee outlined their approach to the talks in a Wall Street Journal op-ed published Wednesday.

“We know that our goal is to reduce spending. But we also know that America faces not just a budget deficit but also a jobs deficit. Nobody on this committee would be happy if we reduced the budget deficit but even more Americans end up losing their jobs,” Murray, Baucus and Kerry wrote in the op-ed.

Senate Democrats tried to get stimulus measures in the debt-ceiling deal but failed. They were seeking a, extension to the payroll tax holiday, extension of unemployment insurance and new infrastructure spending.