Obama Tells Automakers To Dump Their Profitable SUV's and Trucks 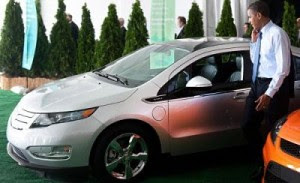 If President Obama had his way, automakers would dump SUV's and trucks for economy cars and electric vehicles. Of course, automakers are going to make what sells at a decent profit, not what s politically correct according to the Obama administration. This lecture by Obama only highlights his complete lack of business experience.

“You can’t just make money on SUVs and trucks,” Obama said during a town hall forum in Cannon Falls, Minn. “There is a place for SUVs and trucks, but as gas prices keep on going up, you have got to understand the market. People are going to try to save money.”

Obama has positioned the revival and reshaping of the auto industry as a major part of his administration’s push to improve the economy and create jobs.

“When I came into office they were talking about the liquidation of GM and Chrysler, and a lot of folks said you can’t help them, and it’s a waste of the government’s money to try and help them,” Obama said Monday. “But what I said was, we can’t afford to lose up to a million jobs in this country, particularly in the Midwest.”

Obama was speaking at the start of a three-day bus tour of the Midwest. He will visit Decorah, Iowa, later in the day.