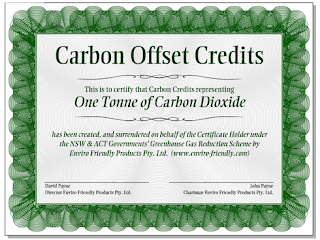 Romania has blocked from selling carbon credits by the Kyoto Protocol committee. There have been "irregularities" in the country's carbon emissions data.

But the committee that monitors Kyoto Protocol compliance decided to suspend Romania from the programme due to "irregularities observed" in Bucharest's 2010 greenhouse gas emissions data, the environment ministry statement said.

The suspension has immediate affect, and Bucharest must put in place an "adequate" system for monitoring emissions before it can resume selling carbon offsets, the ministry explained.

The reason Romania is being prevented is because the Carbon Offset scam is to funnel money from rich first world countries to poor third world ones. Since Romania is part of EURO automatically puts it into first world category. SO NO FUNDS FOR YOU.