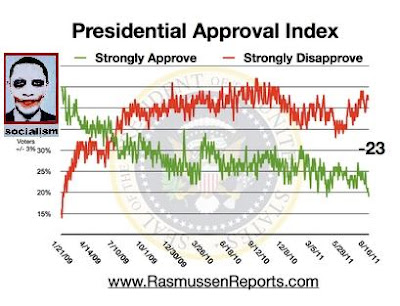 The Rasmussen Reports daily Presidential Tracking Poll for Tuesday shows that 19% of the nation’s voters Strongly Approve of the way that Barack Obama is performing his role as president. Forty-two percent (42%) Strongly Disapprove, giving Obama a Presidential Approval Index rating of -23 (see trends).

At 19%, the number who Strongly Approve matches the lowest total yet recorded for this president. It has fallen that low only once before, on April 11 of this year. While 45% of Democrats Strongly Approve, just 4% of Republicans and 8% of unaffiliated voters share that enthusiasm.