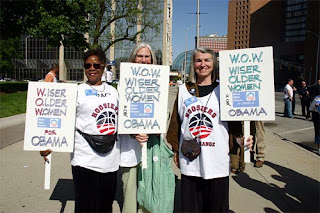 Only 41% of women now approve of the job President Obama is doing. That is a new low. Obama's support among women is down from a high of 70% early in his presidency.


(CNSNews) — Barack Obama defeated Sen. John McCain 56 percent to 43 percent among female voters in the 2008 presidential election, according to the network exit poll, and Obama’s job performance as president won the support of 70 percent of women early in his tenure.

But Gallup polling last week showed that only 41 percent of women now say they approve of the way Obama is handling his job as president. That is an all-time low — down from the previous low of 43 percent, which is what Obama’s approval had been among women in each of the previous three weeks.

Obama’s approval has dropped 11 points among women over the past three months. In the last week of May, according to the Gallup poll, the president’s approval among females was at 52 percent.