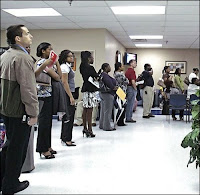 Both the CBO and OMB released revised economic projections yesterday. Hidden in the data from the CBO was this calculation from Keith Hennesssey.

Yesterday the Congressional Budget Office released their “summer update” publication, in which they update their baseline budget and economic projections for changes in the economy and legislation enacted so far this year. The Administration also released their “Mid-Session Review” publication, which makes similar updates for the President’s policy proposals.

Most of the press coverage focused on the updated budget deficit projections. I instead want to draw your attention to one component of the new CBO economic forecast.

Based on CBO’s forecast for the average unemployment rate in calendar year 2010, 2.3 million fewer people will be employed on average next year than they projected in January.