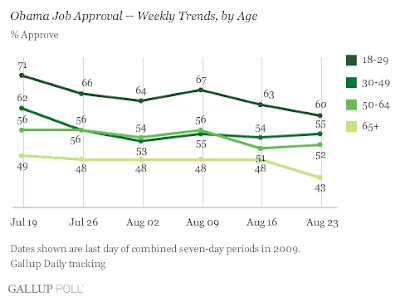 Approval of Obama is down among all major age groups over the past month, but the drop has been particularly steep -- 11 points -- among adults aged 18 to 29 (though young Americans continue to give Obama the strongest support). It has dropped by four to seven points during that time among the three older age categories of Americans. However, over the past week, the sharpest drop -- from 48% to 43% -- has been among seniors.

Seniors remain the only age group whose average approval rating of Obama is below 50%, a pattern seen since mid-July. But last week, for the first time, finds more seniors disapproving than approving of Obama (48% disapprove vs. 43% who approve).

Support for Obama has also dropped below 50% for the first time among upper-income Americans (those making $90,000 or more per year) and registers below that threshold for only the second time among upper-middle-income earners (those earning from $60,000 to $89,999).