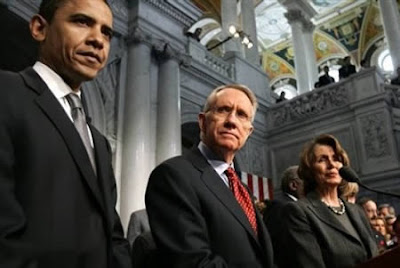 Democrats appear ready to drop all pretense of trying to work with Republicans on a health care reform bill. The weekend disaster where HHS Secretary Kathleen Sebelius hinted the Obama administration was ready to drop the public option from health care reform legislation has caused the Democrats to rethink their strategy. The left wing of the democratic Party went "bonkers" when they heard their "beloved" government run insurance option might be dropped from the final bill. President Obama is failing on his promise of bipartisanship. Here is what he said in his victory speech.

"In this country, we rise or fall as one nation, as one people," Obama said. "Let's resist the temptation to fall back on the same partisanship and pettiness and immaturity that has poisoned our politics for so long."

Here is what is actually happening today.

WASHINGTON — Given hardening Republican opposition to congressional health care proposals, Democrats now say they see little chance for the minority's cooperation in approving any overhaul, and are increasingly focused on drawing support for a final plan from within their own ranks.

Top Democrats said Tuesday that their go-it-alone view was being shaped by what they saw as Republicans' purposely strident tone against health care legislation during this month's congressional recess, as well as remarks by leading Republicans that current proposals were flawed beyond repair.

The White House spokesman, Robert Gibbs, said of Republican lawmakers, "Only a handful seem interested in the type of comprehensive reform that so many people believe is necessary to ensure the principles and the goals that the president has laid out."

The Democratic shift may not make producing a final bill much easier. The party must still reconcile the views of moderate and conservative Democrats worried about the cost and scope of the legislation with those of more progressive lawmakers determined to win a government-run insurance option to compete with private insurers.

How you tell when politician lie?