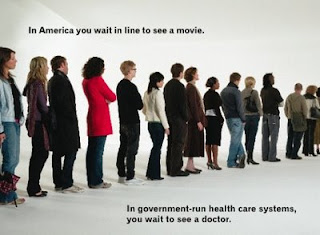 Obamacare supporters claim that giving everyone insurance will reduce the use of the emergency room at the local hospital and there will be a huge cost savings. This seems on the surface to be a logical argument. Going to a primary care physician is a lot cheaper than the hospital emergency department. Will this change actually save money on emergency hospital visits? Let's examine Massachusetts which enacted legislation the in 2006 that much of Obamacare is modeled after. Massachusetts has a 97% insurance coverage rate and the highest highest concentration of doctors in the US. Strangely, emergency room visits have increased by 7% since insurance coverage was dramatically increased in Massachusetts. Why is this? Even though Massachusetts has the highest concentration of doctors nationwide, there aren't enough to cover the influx of new patients. Wait times have dramatically increased. If Obamacare is passed, this doctor shortage will be worse in the rest of the country. Long waiting lines are a form of rationing.

(CNN) -- When President Obama recently cited the number of Americans without health insurance, he declared that, "We are not a nation that accepts nearly 46 million uninsured men, women, and children."

Uninsured patients often delay preventive care, waiting to seek medical attention only when their conditions worsen. This leads to more intensive treatment, often in the emergency department or hospital where costs run the highest.

Universal health coverage is therefore a sensible goal, and the reforms being considered all make considerable effort to provide everyone with affordable health care.

But expanding coverage cannot succeed as long as there remains a shortage of primary care clinicians.

After all, what good is having health insurance if you can't find a doctor to see you?

Massachusetts is often held out as a model for national health reform, and the bills being considered in Washington emulate much of that state's 2006 landmark universal coverage law. As a physician in neighboring New Hampshire, I have had the opportunity to observe the effect of the Massachusetts reforms.

Today, 97 percent of Massachusetts residents have health insurance, the highest in the country. But less publicized are the unintended consequences that the influx of half a million newly insured patients has had on an unprepared primary care system.

The Massachusetts Medical Society reported that the average wait time for a new patient looking for a primary care doctor ranged from 36 to 50 days, with almost half of internal medicine physicians closing their doors entirely to new patients. And when you consider that Massachusetts already has the highest concentration of doctors nationwide, wait times will likely be worse in other, less physician-abundant parts of the country, should universal coverage be enacted federally.

When patients are forced to wait weeks to obtain medical care, they inevitably find their way into the emergency department for treatment that ordinarily can be handled in a doctor's office. Indeed, since health reform was passed, according to state data provided to the Boston Globe, Massachusetts emergency rooms have reported a 7 percent increase in volume, which markedly inflates costs when you consider that emergency room treatment can be up to 10 times more expensive than an office visit for the same ailment.