Every state is now more conservative than liberal 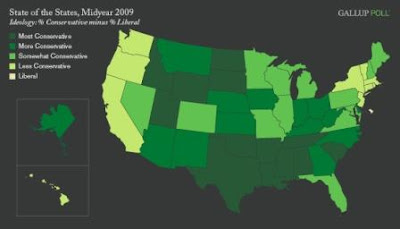 Despite the Democratic Party's political strength -- seen in its majority representation in Congress and in state houses across the country -- more Americans consider themselves conservative than liberal. While Gallup polling has found this to be true at the national level over many years, and spanning recent Republican as well as Democratic presidential administrations, the present analysis confirms that the pattern also largely holds at the state level. Conservatives outnumber liberals by statistically significant margins in 47 of the 50 states, with the two groups statistically tied in Hawaii, Vermont, and Massachusetts.