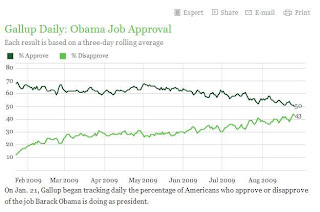 President Obama is on a pace to drop below 50% approval during his first year of office. The Gallop Daily Obama Job Approval had President Obama's approval at 50% yesterday. Only two other Presidents approval numbers have faded faster.

From the LA Times:

Should the slide continue, Obama will by no means be the first president to slide below 50% in the Gallup Poll, which has been tracking public approval of presidents since Harry S. Truman.

But Obama has reached his new low more quickly than most of his predecessors did, according to Gallup. The percentage of people voicing disapproval for the job the president is performing also stands at a near-high of 43%.

Slipping below 50% before November of the first year in office would represent “the third-fastest drop” since World War II, Gallup reports. Republican Gerald Ford slipped below 50% in his third month as president, Democrat Bill Clinton during his fourth month.