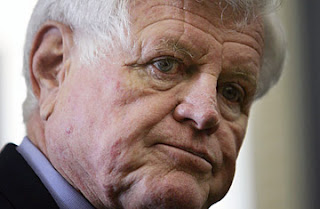 Ted Kennedy is gravely ill, with brain cancer, and thinking about what will happen to his Senate seat if he has to step down. He appears to be concerned the citizens of Massachusetts will only have one Senator during the 5 months it will take to have a special election. Kennedy has written a letter to Massachusetts Gov. Deval Patrick, House Speaker Robert DeLeo and Senate President Therese Murray asking they change state law to allow a speedy replacement. Here is part of what he wrote.

The law now mandates that the special election be held 145 to 160 days after a Senate seat becomes vacant. I strongly support that law and the principle that the people should elect their Senator; I also believe it is vital for this Commonwealth to have two voices speaking for the needs of its citizens and two votes in the Senate during the approximately five months between a vacancy and an election.

I therefore am writing to urge you to work together to amend the law through the normal legislative process to provide for a temporary gubernatorial appointment until the special election occurs.

Why does this make Kennedy a hypocrite? The Massachusetts Governor used to have the power to appoint a temporary replacement if a Senate seat became vacant. This power was revoked in 2004 when the Democratic Legislator was afraid then Governor Mitt Romney would get to appoint a replacement for Senator John Kerry if he won the Presidential election. Kennedy supported that change.

Until 2004, state law called for the governor to appoint a temporary replacement if a Senate seat became vacant. But when Senator John Kerry, a Democrat, was running for president that year, the Democratic-controlled state legislature wanted to deny the governor at the time — Mitt Romney, a Republican — the power to name a successor if Mr. Kerry won.

In his letter, Mr. Kennedy wrote that he supported the 2004 law, but he added, “I also believe it is vital for this Commonwealth to have two voices speaking for the needs of its citizens and two votes in the Senate during the approximately five months between a vacancy and an election.”

Almost 5 years have passed since the the law was changed in 2004 to prevent Governors from appointing replacements. Why is Senator Kennedy speaking out now? According to the New York Times, Kennedy is concerned the Democrats won't have enough votes to pass ObamaCare.

Mr. Kennedy did not mention the issue in the letter, delivered Tuesday, but it is clear that Democratic votes will be crucial to passing the health care legislation that is the subject of intense Congressional debate. Mr. Kennedy has been a supporter of overhauling the health care system, but his absence from the debate and from public life in recent months has raised speculation that he will not be well enough to cast a vote when the time comes.

Should Mr. Kennedy resign or die before then, it is rather likely that, under current law, his seat would still be vacant when the bill came up for a vote.