Seniors quit AARP in droves over group's support for ObamaCare 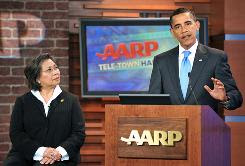 WASHINGTON (AP) — About 60,000 senior citizens have quit AARP since July 1 due to the group's support for a health care overhaul, a spokesman for the organization said Monday.

The membership loss suggests dissatisfaction on the part of AARP members at a time when many senior citizens are concerned about proposed cuts to Medicare providers to help pay for making health care available for all. But spokesman Drew Nannis said it wasn't unusual for the powerful, 40 million-strong senior citizens' lobby to shed members in droves when it's advocating on a controversial issue.