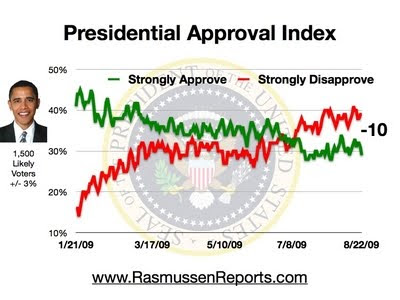 President Obama's Presidential Approval Index is -10 today. This is the first time it has been this low in August. The last time Obama's number was this low, he had his foot in his mouth over the incident involving a Cambridge cop and a Harvard professor.

The Rasmussen Reports daily Presidential Tracking Poll for Saturday shows that 29% of the nation's voters Strongly Approve of the way that Barack Obama is performing his role as President. Thirty-nine percent (39%) Strongly Disapprove giving Obama a Presidential Approval Index rating of -10 This is the first time since July 31 that the President’s Approval Index has fallen to negative double digits (see trends).