Obama invokes grandmother's death to support ObamaCare, but failed to attend her service 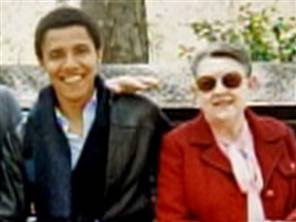 President Obama brought up his grandmother's death to convince people Democrats don't want to 'pull the plug' on the elderly.

President Barack Obama invoked his own anguish over the death of a loved one as he challenged the debunked notion that Democratic efforts to overhaul the nation's health care would include "death panels."

"I just lost my grandmother last year. I know what it's like to watch somebody you love, who's aging, deteriorate and have to struggle with that," an impassioned Obama told a crowd as he spoke of Madelyn Payne Dunham. He took issue with "the notion that somehow I ran for public office or members of Congress are in this so they can go around pulling the plug on grandma."

You may remember Presidential candidate Obama left the campaign trail on October 24, 2008 to fly to Hawaii and visit his terminally ill grandmother, Madelyn Dunham.

Barack Obama does not know if his maternal grandmother, Madelyn Dunham, will live to see whether the improbable dream is realized. He left the campaign trail and arrived Friday at the modest apartment building at a busy intersection near downtown where he once lived with his grandparents, to see her at least one more time.

"You know, we weren't sure, and I'm still not sure, whether she makes it to Election Day," Obama said in an interview with "Good Morning America." "We're all praying and we hope she does."

"She's the one who taught me about hard work," he told a packed stadium in Denver the night he accepted the Democratic presidential nomination. "She's the one who put off buying a new car or a new dress for herself so that I could have a better life.

"She poured everything she had into me."

Madelyn Dunham passed away two days before the election.

HONOLULU - Barack Obama's grandmother, whose personality and bearing shaped much of the life of the Democratic presidential contender, has died, Obama announced Monday, one day before the election. Madelyn Payne Dunham was 86.

Obama announced the news from the campaign trail in Charlotte, North Carolina. The joint statement with his sister Maya Soetoro-Ng said Dunham died peacefully late Sunday night after a battle with cancer.

President-elect Barak Obama decided to rest in Chicago after his grandmother's death.

HONOLULU (AP) - President-elect Barack Obama will visit Hawaii in December to honor his grandmother ''Toot,'' who died two nights before the election, and to relax with his family before he takes the reins of the federal government in January.

Campaign officials will not specify when Obama will arrive. He, wife Michelle and two daughters have vacationed in Hawaii during the winter holidays in recent years.

Obama's maternal grandmother, Madelyn Dunham, died in Honolulu at 86 after a long illness. As a youngster, he called her Toot, from the Hawaiian word ''tutu,'' which means grandmother.

Obama planned to stay home in Chicago this weekend, with a blackout on news announcements so that he and his staff can rest after a grueling campaign and the rush of their victory Tuesday night. No plans for Dunham's funeral or memorial service have been announced.

Madelyn Dunham was cremated. A memorial service was held on November 15, 2008, but Barack Obama and his close family members were missing.

At the National Memorial Cemetery of the Pacific at Punchbowl, in Honolulu Friday, at a memorial service for friends and co-workers, President-elect Obama's grandmother Madelyn Dunham -- who died the Sunday night before her grandson was elected president -- was eulogized as a strong woman.

There will be a private memorial for family members later this year.

Obama and his half-sister Maya Soetoro-Ng sent a letter read by Al Landon, chief executive officer of the Bank of Hawaii, where Dunham had worked.

Dunham was cremated, but it's not yet clear what will become of her ashes.

Barack Obama failed to attend the service of the grandmother who helped raise him. No member of his immediate family showed up to honor the woman he said, "put off buying a new car or a new dress for herself so that I could have a better life." Many people fail to attend family members funeral services because they can't afford to travel, can't get off work or are too ill to make the trip. None of these reasons apply to Obama.
Posted by Bluegrass Pundit at 7:36:00 AM

For the record, let me state that I am NOT a fan or supporter of Obama. With that said...

Funeral services are not for the dead, but for the living who are left. It does the deceased no good for you to attend their funeral. It may help you feel better, but it does nothing for them. It sounds like Obama paid his respects and said goodbye while his Grandmother was alive and could see him and hear his voice. That's better than attending a funeral any day in my book.

Sad that he would use his Grandmother's name for political purposes, reminding everyone of just how much she had given and how much she meant to him, and yet he skipped out on her funeral. I wonder if she had been there when he was born...wherever that might have been?

"Obama paid his respects and said goodbye while his Grandmother was alive and could see him and hear his voice. That's better than attending a funeral any day in my book."

I agree paying respect to the living is better than to the dead. However, they aren't mutually exclusive. I was at my grandmother's funeral. I can't imagine having missed it for any reason. Granted, there could be reasons people can't attend. I don't think any of these reasons applied to Obama and Michelle.

Isn't that what communism runs on? The blood of the dead? You can turn them into whatever you want after death because they don't speak or breathe. Too bad eh forgot the little detail of not attending the funeral, shoot.