Tort reform would save money without hurting medical care. Why is Obama against it?

Here is what President Barack Obama said to the American Medical Association.

Now, I recognize that it will be hard to make some of these changes if doctors feel like they’re constantly looking over their shoulders for fear of lawsuits. I recognize that. (Applause.) Don’t get too excited yet. Now, I understand some doctors may feel the need to order more tests and treatments to avoid being legally vulnerable. That’s a real issue. (Applause.) Now, just hold on to your horses here, guys. (Laughter.) I want to be honest with you. I’m not advocating caps on malpractice awards — (boos from some in audience) — (laughter) — which I personally believe can be unfair to people who’ve been wrongfully harmed.

A more likely explanation is it would be unfair to the trial lawyers who made massive contributions ($43 million) to his campaign. 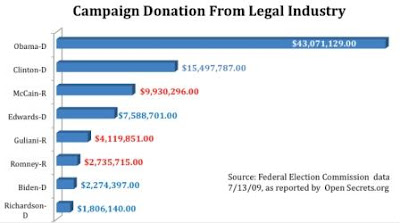 Presidential Candidate Barack Obama received 48% of all dollars from the legal industry. President Obama isn't likely to throw that much campaign cash under the bus for any reason.
Posted by Bluegrass Pundit at 3:19:00 PM