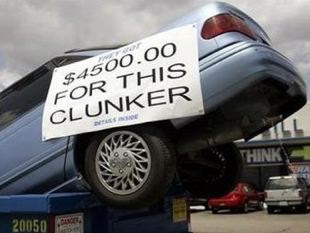 Many dealers are dropping out of the Cash for Clunkers" program in spite of significant increases in sales. The reason is they aren't getting paid. Only 2% of the money due under this program has been paid to dealers so far. Do you really want these people administering this program in charge of your health care?

AP reported via the NYP:

The Greater New York Automobile Dealers Association, which represents dealerships in the New York metro area, said about half its 425 members have left the program because they cannot afford to offer more rebates. They're also worried about getting repaid.

"(The government) needs to move the system forward and they need to start paying these dealers," said Mark Schienberg, the group's president. "This is a cash-dependent business."

The program offers up to $4,500 to shoppers who trade in vehicles getting 18 mpg or less for a more fuel-efficient car or truck. Dealers pay the rebates out of pocket, then must wait to be reimbursed by the government. But administrative snags and heavy paperwork have created a backlog of unpaid claims.

Schienberg said the group's dealers have been repaid for only about 2 percent of the clunkers deals they've made so far.

Many dealers have said they are worried they won't get repaid at all, while others have waited so long to get reimbursed they don't have the cash to fund any more rebates, Schienberg said.