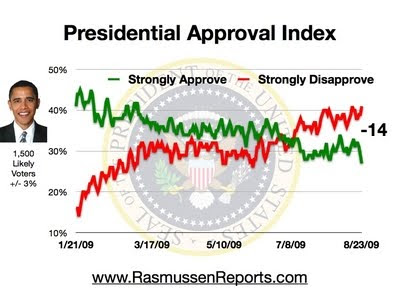 The number of likely voters who strongly disapprove of President Obama now outnumber those who strongly approve by 14 points. This is a new low. The previous low was at the end of July after Obama made the racial remarks about Gates arrest.

The Rasmussen Reports daily Presidential Tracking Poll for Sunday shows that 27% of the nation's voters Strongly Approve of the way that Barack Obama is performing his role as President. Forty-one percent (41%) Strongly Disapprove giving Obama a Presidential Approval Index rating of -14. These figures mark the lowest Approval Index rating yet recorded for this President. The previous low of -12 was reached on July 30 (see trends).