President Obama continues to lose his shine. According to the Rasmussen Daily Presidential Tracking Poll, only 46% of likely voters somewhat approve of his performance.

Overall, 46% of voters say they at least somewhat approve of the President's performance. That’s the lowest level of total approval yet measured for Obama. Fifty-three percent (53%) now disapprove. Eighty-one percent (81%) of Democrats approve while 83% of Republicans disapprove. As for those not affiliated with either major party, 66% disapprove 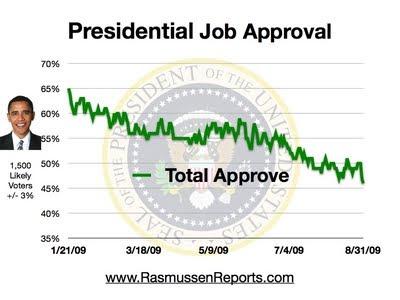