Here is a screen shot of My.BarackObama.com. This is President Obama's organizing For America website. 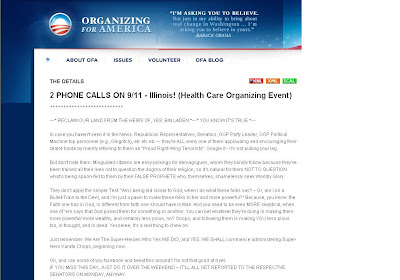 The text of this page has now been modified. Here is what it previously said.

In case you haven't seen it in the News: Republican Representatives, Senators, GOP Party Leader, GOP Political Machine top personnel (e.g., Gingritch), etc etc etc --- they're ALL every one of them applauding and encouraging their zealot-horde by merrily referring to them as "Proud Right-Wing Terrorists". Google it - I'm not pulling your leg.

But don't hate them: Misguided citizens are easy-pickings for demagogues, whom they blindly follow because they’ve been trained all their lives not to question the dogma of their religion, so it’s natural for them NOT TO QUESTION what’s being spoon-fed to them by their FALSE PROPHETS who, themselves, shamelessly seek Worldly Glory.

They don’t apply the simple Test: “Am I being led closer to God, when I do what these folks say? – Or, am I on a Bullet-Train to the Devil, and I’m just a pawn to make these folks richer and more powerful?” Because, you know: the Faith one has in God, is different from faith one should have in Man. And you need to be even MORE skeptical, when one of ‘em says that God picked them for something or another. You can bet whatever they’re doing is making them more powerful/ more wealthy, and certainly less pious, no? Ooops, and following them is making YOU less pious too, in thought, and in deed. Yesseree, it’s a real thing to chew on.

Just remember: We Are The Super-Heroes Who Yes WE DID, and YES, WE SHALL commence administering Super-Hero Karate Chops, beginning now.

Oh, and can some of you facebook and tweat this around? I'm not that good at it yet.
IF YOU MISS THIS DAY, JUST DO IT OVER THE WEEKEND – IT'LL ALL GET REPORTED TO THE RESPECTIVE SENATORS ON MONDAY, ANYWAY.