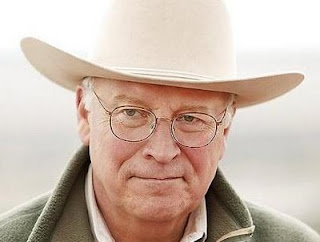 Former VP Dick Cheney was on Fox News Sunday yesterday. Much of the time was spent talking about the insane decision by Team Obama to re-investigate the CIA. In this discussion of what to do about Iran's nuclear program, it sounds like Cheney advocated using military force, but former President George Bush decided against it.

CHENEY: It wasn't my decision to make.

WALLACE: Would you have favored military action?

CHENEY: I was probably a bigger advocate of military action than any of my colleagues.

WALLACE: Do you think that it was a mistake while you were in power, while your administration was in power, not to go after the nuclear infrastructure of Iran?

CHENEY: I can't say that yet. We don't know how it's ultimately going to come out. WALLACE: But you don't...

CHENEY: I think it was very important that the military option be on the table. I thought that negotiations couldn't possibly succeed unless the Iranians really believed we were prepared to use military force.

And to date, of course, they're still proceeding with their nuclear program and the matter has not yet been resolved. We can speculate about what might have happened if we'd followed a different course of action.

As I say, I was an advocate of a more robust policy than any of my colleagues. But I didn't make the decision.

WALLACE: Including the president.

CHENEY: The president made the decision, and obviously we pursued the diplomatic avenues.

WALLACE: Do you think it was a mistake to let the opportunity, when you guys were in power, go, knowing that here was Barack Obama and he was going to take a much different...

CHENEY: I'm going to -- if I address that, I'll address it in my book, Chris.

WALLACE: It's going to be a hell of a book.

CHENEY: It's going to be a great book.

Full transcript here.
Posted by Bluegrass Pundit at 5:07:00 AM

The Big Dick should start exercising his 5th Amendment rights. What he says should be used against him in a court of law.