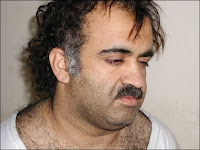 Khalid Sheik Mohammed was subjected to some of the toughest enhanced interrogation techniques. He was reportedly waterboarded some 187 times. Now, Khalid Sheik Mohammed is considered one of our best al-Qaeda intelligence assets. One former senior intelligence official attributes this cooperation to those enhanced techniques. Mohammed does claim he sometimes gave false information to interrogators.

WASHINGTON - After enduring the CIA's harshest interrogation methods and spending more than a year in the agency's secret prisons, Khalid Sheik Mohammed stood before U.S. intelligence officers in a makeshift lecture hall, leading what they called "terrorist tutorials."

In 2005 and 2006, the bearded, pudgy man who calls himself the mastermind of the Sept. 11, 2001, attacks discussed a wide variety of subjects, including Greek philosophy and al-Qaeda dogma. In one instance, he scolded a listener for poor note-taking and his inability to recall details of an earlier lecture.

Speaking in English, Mohammed "seemed to relish the opportunity, sometimes for hours on end, to discuss the inner workings of al-Qaeda and the group's plans, ideology and operatives," said one of two sources who described the sessions, speaking on the condition of anonymity because much information about detainee confinement remains classified. "He'd even use a chalkboard at times."

Over a few weeks, he was subjected to an escalating series of coercive methods, culminating in 7 1/2 days of sleep deprivation, while diapered and shackled, and 183 instances of waterboarding. After the month-long torment, he was never waterboarded again.

"What do you think changed KSM's mind?" one former senior intelligence official said this week after being asked about the effect of waterboarding. "Of course it began with that."

Mohammed, in statements to the International Committee of the Red Cross, said some of the information he provided was untrue.