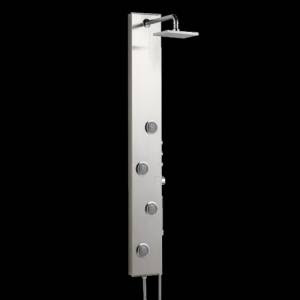 Consumer Reports is supposed to be for consumers. So, what do you think they did when they found an excellent shower head (pictured above) with a really forceful spray? They reported it to EPA as illegal. Consumers will have to keep on struggling to get the shampoo out of their hair.

Consumer Reports states that the British-made Hudson Reed Theme Thermostatic Shower Panel had a forceful spray that “seemed too good to be true—or legal.” Environmental Protection Agency regulations limit shower head water flow to no more than 2.5 gallons per minute. Consumer Reports acknowledges that many shower fixtures get around this rule by using several shower heads, but the magazine decided to report the new single-head fixture to authorities, anyway. (In its words, "We've contacted EPA....")